Why Focus On Growing Sweet Potatoes?

The Sweet Potato And Its Leaves Are Delicious, Nutritional All-Stars

That Are Needed Globally

If you could focus on making a global impact by growing just one crop and improving its yield such that it would provide the world with starvation protection, improved health and economic benefits, you would want to focus on advancing the production and harvest of the sweet potato.

In fact, the Orange Sweet Potato (OSP) has been hailed as the “Mother Teresa of foods;" as "the number one healthiest vegetable;" and as "one of the five most innovative ways to feed the planet."

Beyond the potatoes themselves providing tremendous nutrients, sweet potato leaves, served as a vegetable, may become Popeye’s new food de resistance. The leaves, which grow abundantly in poor soil, wet soil and rich soil, can be continuously cropped until the root vegetables are harvested.

In just one example of the tremendous need for sweet potatoes, each year, almost 30,000 children die in Uganda alone, due to causes related to vitamin A deficiency and starvation (which sweet potatoes can address).

The following chart from the International Potato Center illustrates the role of Sweet Potatoes (described as Yams) in combatting malnutrition:

"So good for you is the humble sweet potato that Nutrition Action Health Letter once rated it the number one healthiest vegetable," noted Dr. Andrew Weil, in an article appearing in the website Prevention.

"You can survive on sweet potatoes during periods of starvation," noted Janice Bohac, PhD, a research geneticist and sweet potato breeder at the USDA Agricultural Research Service's Vegetable Laboratory in Charleston, SC. "They're a far more complete food than rice."

That's why St. Matthew Church is partnering with the Global Institute For Transformation* (GIFT) and encouraging U. S. churches to help churches and families in the developing world learn how to optimally grow sweet potatoes.  Our goal is to share knowledge and best practices with churches globally to bring life-saving nutrition and ecomomic empowerment to as many households as possible.

According to the Prevention website, "Sweet potatoes contain a high-quality protein, similar to that found in eggs, and are packed with nutrients, including high levels of carotenoids (especially beta-carotene), copper, vitamins C and E, and fiber. What's more, sweet potatoes are much lower on the glycemic index scale than white potatoes. That means that even carbohydrate-sensitive people and diabetics can include these good carbs in their diets."

According to the above criteria, sweet potatoes earned 184 points, 100 points over the next vegetable on the list.

As noted in the nutritional charts below, Sweet potatoes are a top performer in providing "Optimuml Health" and many key nutritional attributes.

Excerpt from Harvest Plus Website:  "A new Harvest Plus 2015 study has found that orange sweet potato (OSP) reduced both the prevalence and duration of diarrhea in young children in Mozambique.

The OSP was conventionally bred to provide more vitamin A in the diet.  In Africa, more than 40 percent of children aged under five are estimated to be at risk of vitamin A deficiency. This increases the risk of diseases such as diarrhea, which is one of the leading causes of mortality in children, taking more than 350,000 lives of children under five in Africa every year.

Other studies have shown that vitamin A supplementation reduces diarrhea incidence in children, particularly those who are undernourished or suffering from severe infections. This newly published research is the first to show that an agricultural food-based approach can improve health in young children.

The study found a 42 percent reduction in the likelihood that children under the age of five who ate OSP within the past week would experience diarrhea. For children under three years of age who ate OSP, the likelihood of having diarrhea was reduced by more than half (52 percent). The OSP had an impact not only on reducing the incidence, but also the duration of diarrhea. For children who had diarrhea, eating OSP reduced the duration of the illness by more than 10 percent in children under five, and more than 25 percent in children aged under three. The children had all eaten OSP within the past week." 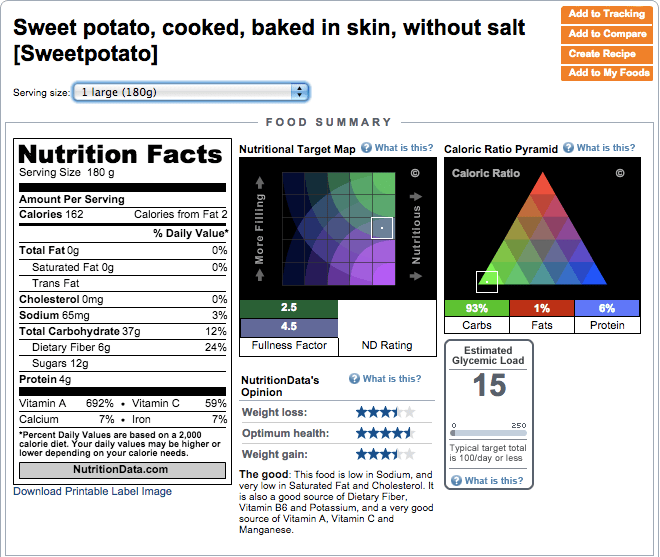 So, eating more sweet potatoes will give you a diet that is high in fiber, provides many nutrients, is rich in complex carbohyrates, and is low in fat.

Sweet potatoes have also earned the respect of the American Cancer Society, American Dietetic Association and American Heart Association for their health merits.  These organizations have gone on record supporting eating sweet potatoes which are nutritious and can be helpful in the prevention of disease.

This root vegetable offers so many attributes and yet it is too often overlooked. It's plentiful throughout the year and can provide vital nourishment.

SWEET POTATO LEAVES ARE A GREAT, DELICIOUS SOURCE OF NUTRITION THEMSELVES

While people in the U. S. are not very familiar with this, sweet potato leaves are a delicious food that's consumed in Asia and elswhere.

Depending on varieties and growing conditions, sweet potato leaves are comparable to spinach in nutrient content.

Levels of iron, calcium and carotene rank among the top, as compared with other major vegetables. Sweetpotato leaves are also rich in vitamin B, ßcarotene, iron, calcium, zinc and protein. Studies have shown that sweet potato leaves contain as many vitamins, minerals and other nutrients as spinach.

Sweet potato leaves are an excellent source of antioxidative polyphenolics, among them anthocyanins and phenolic acids such as caffeic, monocaffeoylquinic (chlorogenic), dicaffeoylquinic and tricaffeoylquinic acids, and are superior in this regard to other commercial vegetables (Ishiguro et al., 2004). The average mineral and vitamin content in a recently developed cultivar, Suioh, is 117 mg calcium, 1.8 mg iron, 3.5 mg carotene, 7.2 mg vitamin C, 1.6 mg vitamin E and 0.56 mg vitamin K/100 g fresh weight of leaves.

For these reasons, the use of sweetpotato leaves as a vegetable and for food processing should definitely be encouraged.

The following is a recent article from Feed The Future documenting just one country's quest to produce more sweet potatoes to impact nutritional deficiencies and survival:

Welsy Anena’s mother is convinced that orange sweet potato (OSP) saved her daughter’s life. Anena had been sickly since birth and at 18 months, she weighed just nine pounds. She had been in and out of hospitals so often that her mother braced herself for the worst.

But when her mother started feeding her OSP, everything changed. Since increasing her consumption of this nutrient-dense food, Anena has grown into a vivacious 30-pound three-year-old.

In Uganda, Anena is one of the lucky ones.

One out of every three Ugandan children under the age of five suffers from vitamin A deficiency. This condition is a leading cause of preventable blindness and increases the risk of disease and death from common childhood infections. Each year, almost 30,000 children in Uganda die due to causes related to vitamin A deficiency.

Now, Uganda is turning to OSP to improve the health and nutrition of its population, particularly among children and their mothers. With its high concentration of beta-carotene, which the body converts to vitamin A, OSP packs a powerful nutritional punch: a single ice cream scoop’s worth is enough to provide a child’s daily vitamin A needs.

OSP has been hailed as the “Mother Teresa of foods” and one of the five most innovative ways to feed the planet.

Ugandans already grow and eat an abundance of sweet potatoes – in fact, Uganda produces more sweet potatoes than any other country in Africa. But whereas sweet potatoes at U.S. supermarkets typically have the same bright orange color as other beta-carotene-rich foods like carrots and apricots, white- and yellow-fleshed potato varieties are more commonly available in Uganda, so OSP is a new twist on an old favorite. The good news for smallholder farmers is that, in addition to offering much greater nutritional value, OSP yields more and matures earlier than the traditional white and yellow varieties.

Using such a widely consumed crop in a targeted way could turn out to be one of the sweetest public health investments in Uganda. Today, more than 100,000 Ugandan farm households across 22 districts are growing OSP and feeding it to their families. This has created a welcome challenge to Feed the Future partner HarvestPlus, which leads the delivery of this conventionally bred nutritious crop to Ugandan farmers.

“There’s much more demand for OSP than there is supply,” notes Anna-Marie Ball, who oversaw the crop’s introduction and expansion in Uganda under the HarvestPlus program. “The task now is to get some of the larger farmers growing it and bringing it to market.”

With support from Feed the Future, HarvestPlus aims to reach more than 225,000 farming households with OSP by 2016. This will involve working with local labs and multipliers to ensure that healthy vines are delivered to farmers for planting, and encouraging farmers who receive free vines to “pay it forward” upon first harvest by sharing the improved vines with others in their communities. The project has also begun introducing another nutritious crop – high-iron beans – in northern, western and central Uganda to help provide a comprehensive and varied “food basket” approach to improved nutrition.

Importantly, the project can count on the commitment of the Government of Uganda. In February 2015, the Speaker of Uganda’s Parliament officially launched a campaign to get OSP to more Ugandans.

“Let me take this opportunity to officially launch the scaling of the orange sweet potato in Uganda and recommend it to farmers, agricultural extension advisors and the general public,” Speaker Rebecca Kadaga announced at the launch event.

This momentum points to a future Uganda where more stories like Anena’s can be told.

This story was contributed by Denis Okello at HarvestPlus, a leader in the global effort to end hidden hunger caused by the lack of essential vitamins and minerals in the diet.